A 4th of July tradition…

About 6 years ago my husband and his best buddy started dressing up in themes for the 4th of July Peachtree Road Race 10k. It’s been a super fun, and yet odd (I’ll get to that part) tradition. Every year, as their group grows they get more and more creative.

So for their first year, if you couldn’t guess it from the picture below, they dressed as secret service agents.  The next year was “running with the bulls”, followed by Olympic Swimmers (yes, with Speedos),  then Redneck Chipendales (my personal favorite), next was 70’s tennis stars, and then there was classic stars of the WWF.

Black suits in the summer in Hotlanta was not such a great idea, but they finished in character of course.  Now you see why they actually wore Speedos one year! 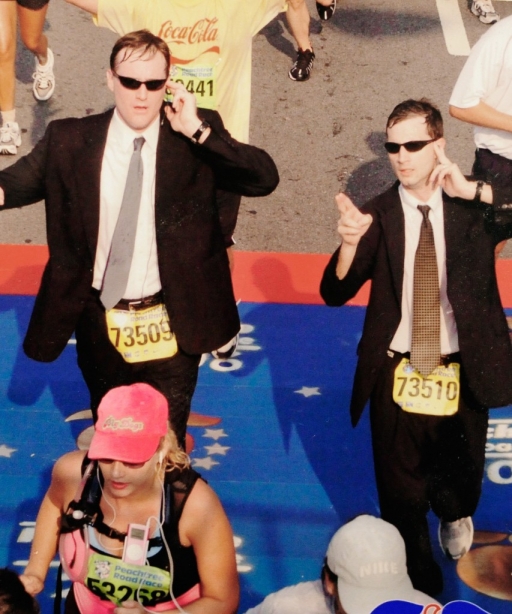 For those of you that don’t know me well, this is so NOT my personality but yes, I did run it one year with the guys and what an experience it was. I was Elizabeth, Rando Macho Man’s wife  (at least, that’s what I was told as I know nothing about wrestling). We also had Hulk Hogan, Jake the Snake, and a few others behind.  While it was a fun experience to share with my hubby and his friends, I don’t think I’ll be joining the group again anytime soon. It takes guts to run like these guys do! And believe me, they are a loud group so there’s no sneaking by in this race. 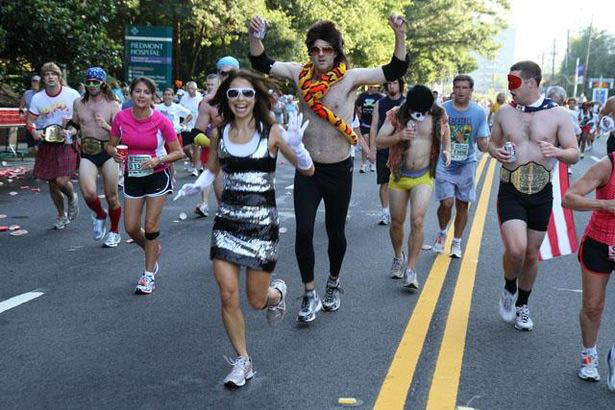 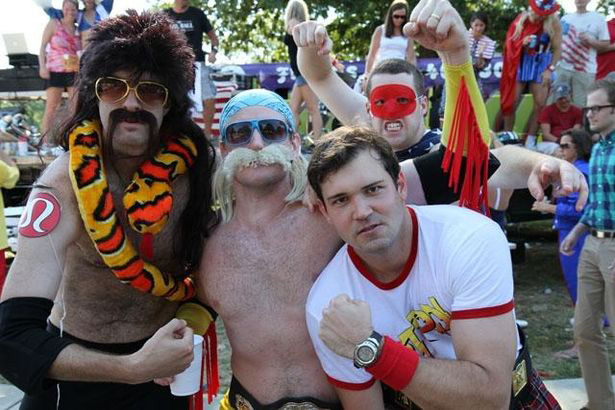 Okay, so back to the part about their “odd” tradition. So not only do theese guys get in full costume and character, and boy do they have character, but once before and twice during the race, they stop at  couple of stations (they stash the night before) and eat a hotdog, drink a Pabst Blue Ribbon, and eat an apple pie.   As they say “What is more American?”. I chose to skip this part of the tradition when I ran with them.   But wow, seeing them eat this stuff, and then run seconds later…they have stomachs of steel!

So the kids kept asking why we had this junk in the house if it is so unhealthy.   Good question.   I decided to read the ingredients to them.  I don’t think I’ve ever read these ingredients (I always read ingredients) because well, I never thought to buy them.  This is what we found in the list:

Shouldn’t we be able to pronounce the food we eat?  Or, at least know what it is for that matter?? Even spell check didn’t know what some of the words were…

By the way, I may not know what all of these chemicals are but I do know it’s a fact that sodium nitrates have been linked with cancer.  For more information on nitrates, read here and here for starters.

Okay, and for the buns there are a lot of ingredients, but I’ll just highlight a few:

What?? That is not food. It’s just not.  It’s chemicals, and some of them are really nasty! I wanted to google a few of these things to see what they actually were, like ammonium sulfate, and the second thing that pops up in the search was, “adding ammonium sulfate to Round Up”.  Hmmm…

A client of mine was telling her friends that I said I would rather her kids eat an organic grass fed hotdog over gluten, sugar filled sugar (yes, even Kashi) cereal.  They were pretty surprised by that and while the hotdog isn’t the perfect breakfast, let’s see why I suggested it over the anti-nutrient, inflammatory alternative…

Let’s look at the ingredients in our hotdogs:

With all of this said, once a year (or once in awhile) won’t hurt my hubby and his friends, so go for it guys and have a blast!!! Just don’t make habit out of it.