Let me start this post with saying that I don’t generally recommend sweets except for an occasional treat. But, when I am baking, I want to be smart with my choice of sweeteners. I want the most natural, most beneficial, and with the lowest (or lower) glycemic options, which is why I use these… 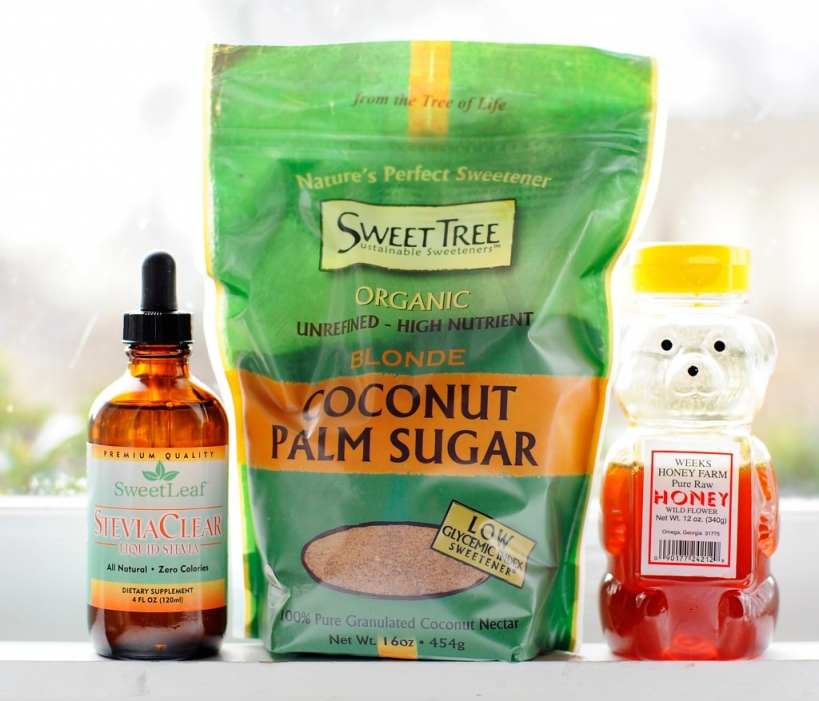 I’ve had a few people ask about sweeteners and they can be very confusing for sure since they all affect us so differently, and there are so many of them. I’m not going to go over my thoughts on sugar (click here if you don’t already know how I feel about this non-food), but I did want to mention the ones we use.

Years ago when I first heard about agave nectar I thought it was a miracle sweetener, especially having hypoglycemic tendencies. Not having processed sugar in years, I was so excited to have an option that was low glycemic! Sounded too good to be true, and for me, it was. Agave is processed through our liver so our bodies digest it similarly to HFCS. The day after eating some, I felt like I was hit by a bus. I was exhausted, swollen, my mind was foggy, and I basically just had all of the old symptoms I use get with sugar, so of course I immediately knew it wasn’t for me. Now some people say (in moderation of course) that it doesn’t bother them which is great, but, others believe it is actually just as bad, if not worse, than HFCS. So, if you are consuming it or giving it to your family, I would suggest doing some more research.

When baking, I like to use either honey (mainly for the kids), raw coconut palm sugar, or stevia and here is why:

Honey is a natural and real food that actually has a small amount of minerals, amino acids, and vitamins. Honey can also improved blood lipids, lowered inflammatory markers, and has a reduced effect on blood glucose levels with lower glycemic levels, especially with darker honeys like Buckwheat or Wildflower. Buckwheat was also found to be the richest in phenolics and flavonoids. But, with all of this said, it is a sugar, so use it in moderation.

Raw coconut palm sugar (aka Coconut Crystals) is my personal favorite. It has very low on the glycemic levels and it’s a great sugar substitute for those watching glucose levels, or those monitoring lipid levels. It cooks well in place of sugars and it actually has potassium, magnesium, zinc and iron, vitamin C and some B vitamins. It has the consistency of a brown sugar and a great flavor. Now I haven’t ever had it say in coffee or tea, so I’m not sure it’s a good substitute for something like that, but for baking, it’s great!

Lastly, there’s stevia which is derived from the stevia plant.  The extract is a super-sweet, low-calorie sweetener that helps regulate blood sugar and actually supports the pancreas. It is great for anyone with diabetes and hypoglycemia since it has a super low glycemic index. The downside it is still processed, but since it’s 200-300 times sweeter than sugar, you don’t need much of it!

Oh, and Whole Foods has a wide selection of raw honeys, the brand of raw coconut palm sugar I like, and stevia although the stevia is cheaper through amazon. Anyway. I hope this helps some!